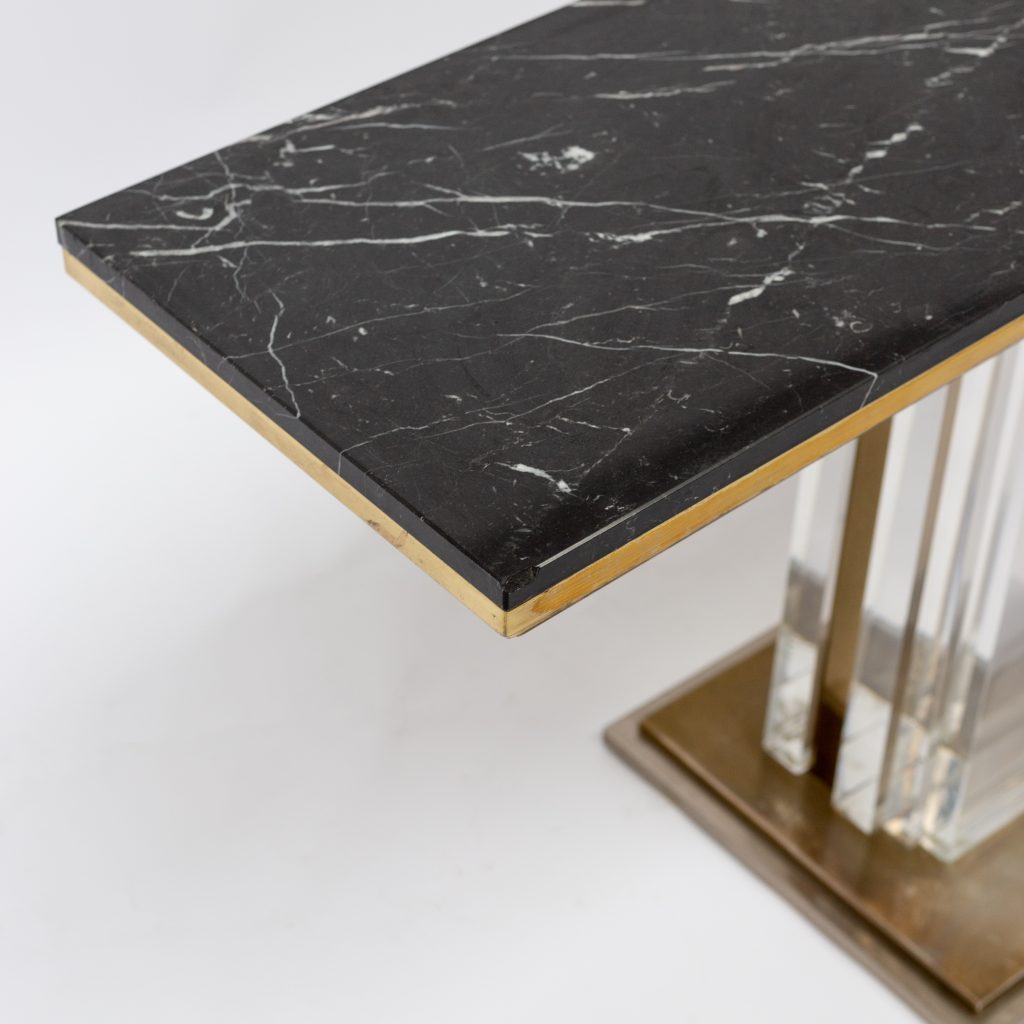 “Imagination and very modern style, which joins well with any environment defines the Italian style of years 1965-1980 which Willy Rizzo claims. As reported by the designer so well, it all starts in a hair salon located Piazza di Spagna in Rome at the end of 1966. While his wife Elsa is getting a hair cut, they both discuss their moving to Italy, where their respective careers so often leads. As Willy likes the neighborhood, he askes the hairdresser where he could find a real estate agent close to the salon. “Of course, just around the corner but you’ll need a miracle to find an apartment.” And the miracle happened in a second floor occupied by a manufacturer of folders with views over the Piazza di Spagna. It was a commercial apartment, abandoned, without water inlet and virtually uninhabitable. He signs right away a lease of six months and returns triumphant to the salon, all in 45 minutes. With a group of neighborhood, Willy turns this room into an apartment. He wants brown and gold walls, a kitchen color of money, land and ceiling black. Then, he designed furniture: sofas, coffee tables, consoles, hi-fi furniture and everything else. The result is very chic. Willy Rizzo never intended to become a designer of furniture, as his friends saw what he had done in his apartment they fell in love with his furniture’s. And as he had many friends in fashion, film, orders poured. One of his first clients is Ghighi Cassini, newspaper columnist social Hearst American who invented the phrase “jet set” to describe the universe and the lifestyle that Fellini immortalized in La Dolce Vita. Cassini wanted an apartment in a modern classical Palazzo. Willy Rizzo has always loved beautiful things, beautiful antiques, he has managed to create contemporary furniture that fit perfectly with the old one. This command has called others of the jet set and high society wealthy Italian. Famous playboys like Rodolfo Parisi, Gigi Rizzi Rapetti and Franco were also part of his prestigious clientele, as the directors Vicente Minnelli, Otto Preminger. Salvador Dali has commissioned several pieces and Brigitte Bardot for the interior of the Madrague in Saint-Tropez.

He furnished aristocrats apartments in the Palazzo Borghese and Palazzo Ruspoli. Rizzo style marked an era. Regarded as the designer of Dolce Vita, he also personified. The demand was such that in 1968, he decided to start his own company. He establish his locations outside of Rome, in Tivoli, where his team grows from 8 employees to 150. In the following years, he created more than 30 furniture’s, steel tables with travertine shelf, table lamps in bronze, all handmade. His furniture is contemporary in style and always based on natural and noble materials such as wood, marble, stainless steel, brass, wild boar. He opened a shop Willy Rizzo, rue du Faubourg Saint-Honoré, and several in France and Europe as well as outlets in New York, Miami and Los Angeles. His creations are published in many magazines and are at least fifteen times the coverage of “Maison et Jardin”
In 1978, Willy sells and returns to his first love, photography. “I’ve never tried to become a businessman and I’m starting to get bored. I miss my bohemian life of photographer, “he says. During these 10 years, Rizzo, great admirer of the sophistication of Mies van der Rohe, Le Corbusier and Ruhlmann, developed a style easily recognizable today. These pieces have clean lines with geometric shapes marked in materials carefully selected, inlaid in brass and chrome. It has always remained faithful to the traditional use of materials specific to artisans, not to return to the system of mass production and plastic that was in the air. The style was first defined by its customers and interior decorating. Comfort, strength and convenience are also important. Thus, modular sofas were lavishly covered with skin and with a control panel that controls the light and the volume of the stereo. The doors of his apartment open and close by snapping in hands. And the tables were equipped with a bar. It has been said that his photos are beautiful because they have a rare simplicity, we can say that his furniture work well in contemporary as they have an elegant simplicity and a purpose. The originality of his furniture comes from its independent creator who has never worked or copied, which explains this striking style and so different. Some of the furniture have been exhibited in New York’s Metropolitan Museum, most recently at the gallery on Madison Mallett and London with Paul Smith. His photographs were published in the book Star Society in 1991, from Schirmer-Mosel, and My Stars, at Hachette-Filipacchi in 2003, pending an exhibition of war photographs at the Museum Niepce in Chalon-sur-Saône.